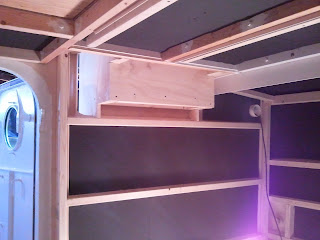 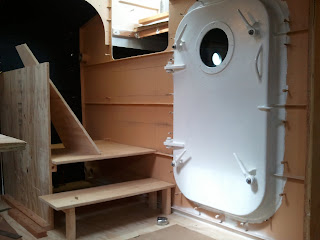 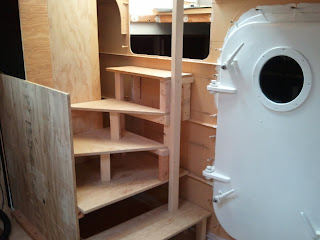 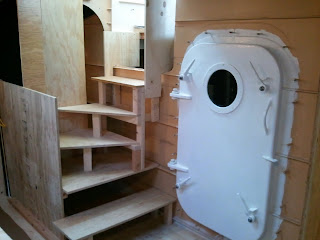 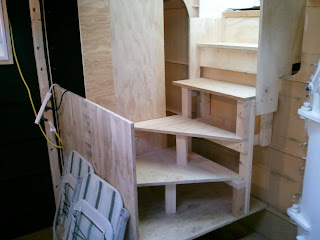 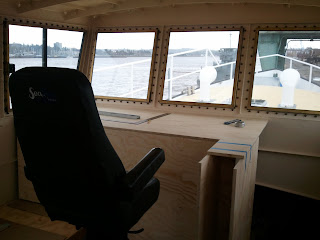 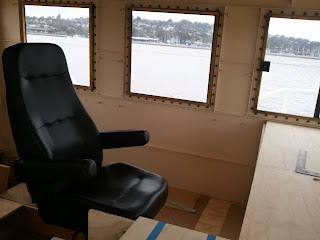 Engine room insulation and finish covering continues, but we had to take a brief detour to address the issue of the stairs from the wheelhouse to the below decks area. Just before we painted the boat last summer, I realized that unless we wanted more of a ships ladder leading to the lower deck, we would need to do some cheating to make real stairs work here… I would have to cut the stairs into the forward engine room bulkhead in order to achieve a usable stairway that wasn’t too steep and wouldn’t require ducking when going up or down. So, out came the cutting torch and we lopped off a notch out of this bulkhead directly under where the steps would go. At the time, like so many of our other early decisions, the dimensions for this cut was kind of an educated guess based on some ballpark stair geometry plus a little extra just in case. Initially we had planned on a straight set of steps, but a few months ago, we changed the layout below to put the dinette on the stbd side, opposite the galley… much better use of space. This caused us to rethink the stairs and we found that the only solution would be a 90 degree stairway. I have never designed anything like that before, so last weekend, I had a big cup of coffee to get my brain working and set about to construct a mock-up so we could try it out. As it turns out, the results were better than expected. I used three 30 degree steps to make the turn and the ergonomics are very good. By narrowing up the stairwell to 26”, it feels quite secure going up and down. The half wall at the base of the stairwell below will form the back of the forward facing dinette bench. This allows plenty of light from above, and makes it relatively easy to carry big awkward things from the wheelhouse to the lower deck. In the wheelhouse we cut and layed out some of the bigger pieces of the console. There is a little side extension to the right of the helm seat that will serve as an easy to reach mounting spot for the engine controls and steering jog lever. I will probably mount a breaker panel for wheelhouse electronics here as well. After actually playing around with the helm seat that we are going to use, we decided that there really isn’t room for two helm seats and the day berth/setee that we want up there… Just too crowded. So, looks like it’ll be just one center helm chair and a nice long L-shaped setee to stretch out on.
Posted by Peter at 7:38 PM