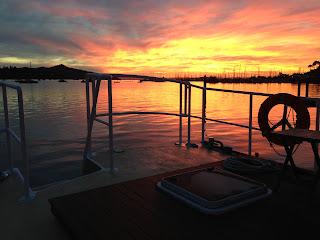 Here's a project that can be filed under "things I wish I had thought to do before fitting out the interior". Once we launched the boat it became apparent that in certain situations there was a significant issue with wave slap under the swim step at the stern of the boat. This seems to occur when we have a certain size of wind wave or chop coming from astern. Because of the tendency for the bow to point into the wind when anchored, this is really only an issue when we are tied to a dock with the wind coming from astern. At our current slip, this occurs in the Winter, when weather systems blow through causing the normally westerly winds to veer to the South East. The picture above is a sunrise from our slip (looking roughly South East). With the swim step integral with the hull, this "dead space" caused the waves slapping under the stern to reverberate through the aft cabin. Since the sound was being transmitted directly into the hull plating, the solution was to dampen the vibration of the hull plate in this area. This space under the swim step is very close to being closed in by our interior paneling and cabinets. Not wanting to do too much experimentation due to the difficult access, I called Soundown and they helped me cut to the chase with the right solution. We ended up using their 1/4" vibration dampening mat which weighs about 2 lbs per square foot. I cut it to fit between the longitudinals and epoxied it in place with some recommended adhesive. Not a particularly fun job, but worth the effort. Initially, I just had the cut material laying on the hull plate and the difference was minor, however gluing the stuff down has made a significant difference in the wave slap. Now during the odd times when we do have waves coming from astern we find that the noise is lower in pitch, not as loud, and doesn't reverberate like it used to. It's still there from time to time, but not nearly as annoying as it was before. I think that once we have the aft cabinetry in place the noise will be even less bothersome. I may use some of the leftover dampening material in the bilge over the prop to reduce some of the noise from the running gear when underway. Last couple of pictures are before and after of the "living room" area forward of the galley and dinette. Since Spring is here, we set-up a workbench arrangement on the dock, moved a bunch of tools into dock boxes, and broke down the workbench/pile of  stuff that had taken over the middle of the boat. Lots more elbow room now. 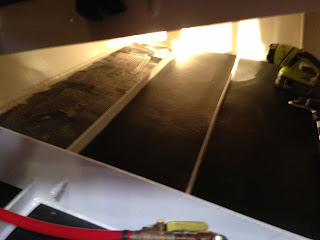 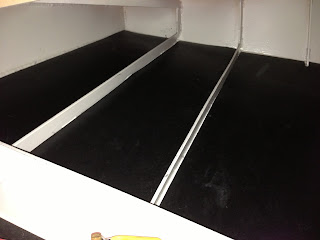 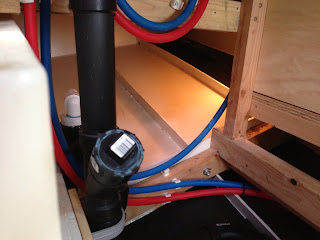 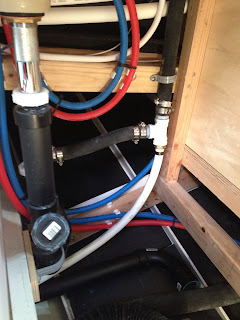 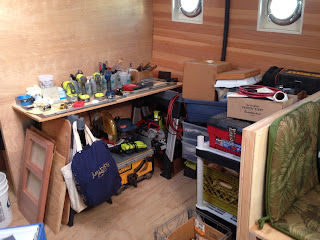 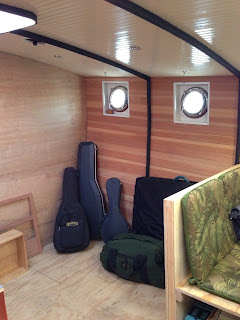