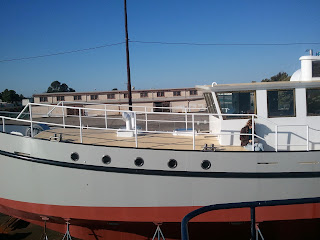 Received our USCG paperwork. We are now an officially documented vessel. I'm sure its just a matter of time now till the tax, regulatory, and insurance folks find us. You might notice that the name of the boat is not Koloa. I'll leave that story for Sue...

Sue here. I’ve been designated by Pete to write this blog entry. A kind of payback for months/years of torture that I caused him while we decided on a name for our vessel.

At first, we planned to call her Koloa which is the Hawaiian word for Duck. We have spent a lot of time in Hawaii and the language is close to our hearts. As the design is based on a George Bueller "Diesel duck", it seemed to make sense at first. That is why the blog is called Building Koloa. However, after months of thinking about it we both came to the realization that Koloa wasn’t working for either of us. The boat design is technically a "Swan", not a "Duck". We pictured the following conversation: “why is your boat called Koloa?”,  “It’s Hawaiian for duck”, “Why Duck”, “Well, the boat design is sort of based on a Diesel Duck - but not really - it’s a Swan” etc... Too long to explain & just didn’t fit. There were no good Hawaiian words for Swan and my Dad (an avid birder) informed us that Swans, while lovely to look at, are kind of mean and aggressive. So we (mostly I) came up with a number of names. Here is a list of some of them…there were more. Many more. They are in no particular order:

Chips Ahoy, Swan Song, E. River (it’s a Swan right?) Gray Goose, Cake, Osprey (There is a pair that nest each year in the crane above our build site), Heavy Metal, Frostie (Based on the Wendy’s beverage that helped fuel many an afternoon of boatwork), Maka Koa (Hawaiian for fierce), Serendipity, Hele Lua (Hawaiian for travel together), Miss Sue, H.F. Sundae (similar to frostie), Mother Ducker, etc.

My nautical-minded husband kiboshed most of these names immediately. Some held on for awhile but never for too long. One name, which of course Pete came up with, seemed to rise above the rest. We liked what it meant & how it sounded. The boat has long, graceful lines & needed a name that would complement these. She also needed a name that would inspire us to do what we want to do with her, aside from just have her sitting in a slip. Alas the name Kama Hele (pronounced KA ma HEH leh), which means Traveler in Hawaiian, was born. 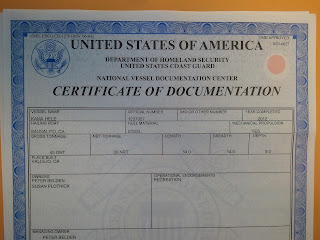