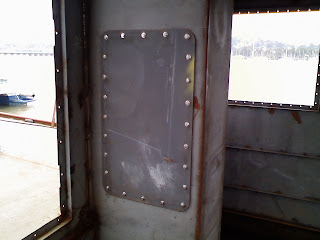 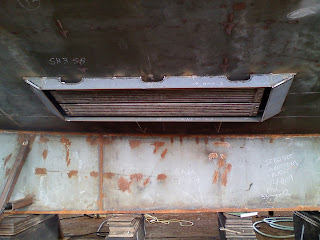 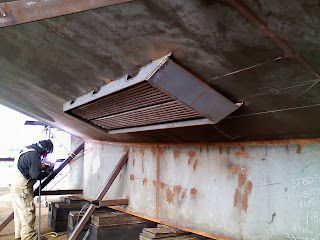 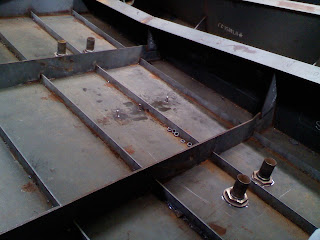 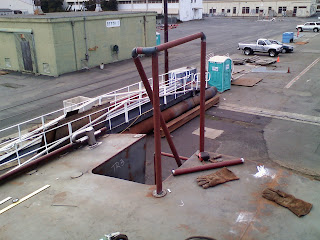 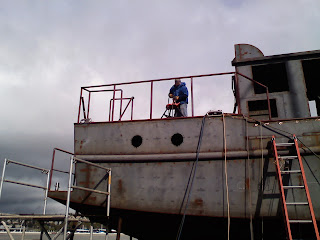 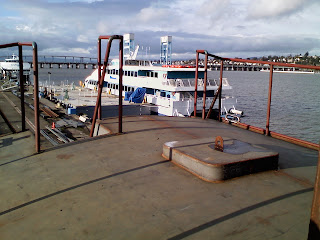 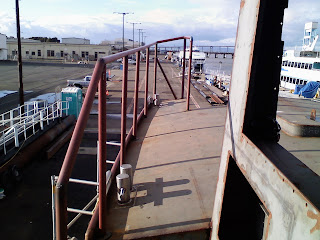 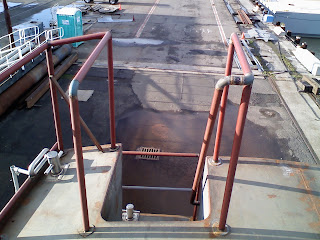 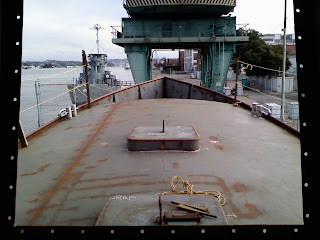 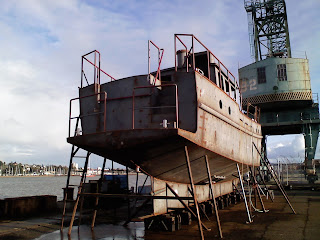 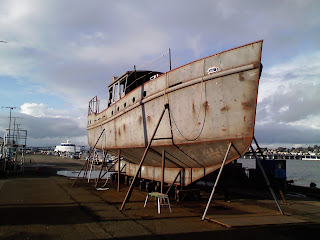 Past few days have seen the completion of the keel cooler assembly fit-up. The keel cooler is basically an underwater radiator that keeps the engine coolant at an acceptable temperature. We are using 2 Fernstrum grid coolers that we got from an army landing craft that was being re-powered. Per Fernstrums recommendation we are going to use both coolers  run in series. One cooler might do it for us under normal conditions, but with two we have some leeway for cruising in warmer water, under heavy load, and factoring in the marine growth that builds up around the coolers between haul-outs. Also with this arrangement, in the event of damage or a leak in one of the coolers, we can re-plumb to a single cooler from inside the boat and keep going. Also did some more drilling and tapping to fit up the bolt-on exhaust trunk access hatch in the wheelhouse. Jesus and his crew have started on the railings and they are coming out very nice. All the railings are made of 1.25" steel pipe with a 1" intermediate rail in the middle. At 42" rail height, they give a great sense of security on deck and are very solid. The aft sections were a little tricky to design because of all the turns and the steps leading down to the swim platform, but I think they turned out nicely and fit the lines of the boat well. The missing section above the transom in the pictures is going to be a removable section that bolts on with SS hardware. This will allow us to have a skiff on the aft deck that hangs over the back if necessary when we are traveling. In protected waters, we would tow the skiff (or hang it off stern davits) and put the aft rail section back in so we could safely use the deck for fishing, lounging, etc. Looking ahead we'll be continuing with railing work, engine room deck plate supports, through hulls, and any other odds and ends that I can think of before we start prepping for paint. We have a big (120lb) Rocna anchor on the way and as soon as that arrives I'll have to get busy designing and fabricating the bow roller assembly to fit. Also have two more big rounds of drilling to do: fuel tank inspection hatches (14 total) and the rest of the portlight openings (13 total). Guess I'll be breaking out the drill bit sharpener again... -PB
Posted by Peter at 6:43 PM